Friday was a wonderful day. In the morning we went to Prof Shields' friend's carpetshop where we got quite the lesson on carpets and kilims and everything associated with them. It was really very informative and enjoyable. The friend's name is Hasan, and the shop's name is adnan & hasan, and they're located within the Kapali Carsi (Grand Bazaar--a very complex area full of wonderful stuff). There are three stores within 5 feet of each other, and its hassle-free shopping. Here's a picture of Hasan... 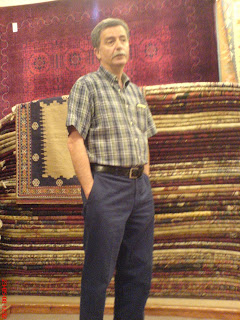 A tall man with very good English. There wasn't exactly a structure to what he told us about rugs, but he worked off a map he had and kind of touched on how rugs are used in the different regions of Turkey; how they're made; what different kinds of knots there are; and the way colors are made. It was a lot of information, but it was fun. Apparently there are two different kinds of knots used to make Turkish rugs--the Persian knot, which is a single knot, and the Turkish knot, also known as the Gordion knot, which is a double knot. He specifically stressed the fact that neither was harder or prettier than the other, they were just different ways of making knots for rugs. Hasan also talked about the different kinds of rugs--there are your normal carpets, kilims, and their sub-categories. For example, for kilims, there are the sumak kind and the cicim kind. The sumak type is more labor intensive and weft-brocaded and either side would work although one side is still the better one. Cicim, however, definitely has a right or wrong side and the work is done simultaneously.

Hasan also talked about the way to price rugs. Specifically for kilims, this is how it goes from least pricey to most:
kilim < cicim < sumak < antique kilim
Obviously antique kilims and carpets are going to cost more than just a normal rug. Hasan mentioned that a good rug should outlast its owner, so if you have a rug and its dying, that means it probably wasn't all that wonderful a quality :D

He also showed us an example of a silk rug which costs a couple thousand lira, which is still pretty much a couple thousand dollars, but it was very beautiful. In most cases rugs, specifically silk ones, are priced by the number of knots per square inch, and this one had quite a lot of knots. Here's a picture of said silk rug... 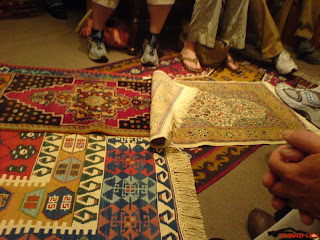 It's the white one that's folded back a bit. Hasan said that you actually seriously count the number of knots in one square inch to determine the price.

Hasan also talked about some of the designs commonly used on carpets and kilims. There was one design he mentioned, called "eli belinde" in Turkish which means "hands on hips," which is a very old design found first on cave walls. This design symbolizes motherhood and fertility. Here's a picture of a kilim with examples of this design... 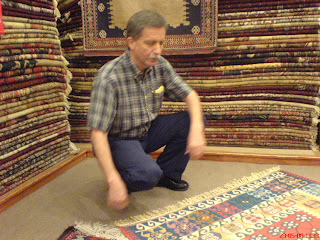 The colorful ones underneath the white, wave-like designs are the "eli belinde" design. Some of the other desings that he mentioned along with what they symbolized were as follows:

Hasan talked some about colors, pricing, and also about the different ways of using rugs and how they can be shaped. For example, they can be shaped and knotted into pillows, saddlebags, grain sacks, cradles, bench covers and many other useful things. We had a very enjoyable time in his shop.

After our time with Hasan in his shop, we went to Caferaga Medrese to have a small lesson on calligraphy. Said lesson was given by Efdaluddin Kilic, a calligrapher of awesome abilities. He showed us his calligraphy materials and demonstrated how the art of calligrahy works. Calligraphy is an art form that goes from teacher to student, and it has a very specific form that must be kept up with. In order to demonstrate this specificity, he drew the letter "waw" which looks like a horizontal nine but not really and placed little squares using the calligraphic pen he had used while drawing the letter itself. Here's an example of that where you can also see the letter I was trying to but failed to describe... 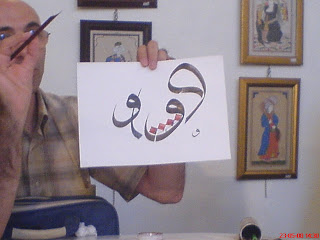 After that he wrote all our names in a very beautiful form. I was kind of jealous of Emily because she got two different styles of her name. Here's a picture of Emily's happiness... 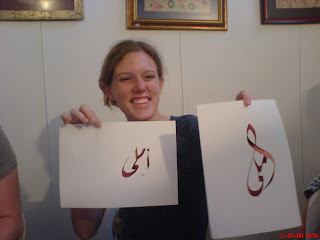 After our calligraphy lesson, we went off to go to the flats but before getting all that far from the Medrese, we stopped at an ice cream stand type dealio and got ice cream. It was very good ice cream and we had fun while trying to get the ice cream because the guy preparing the ice cream was a fun person who obvioulsy liked making people work to get their ice cream. In the end though, the ice cream was gotten and enjoyed immensely.

I got back home to my paternal grandparents' house and then went over to my maternal grandmother's house and spent the weekend and Friday night over at her house. We visited many people over the weekend and I got to spend some time with my grandmother, so I was happy. Sunday morning (May 25) we (being my grandmother and I) were invited to a breakfast by my grandmother's friend and so we went to that. Very nice breakfast. We went to a restaurant type place that had a never-ending and ever-supplied buffet which meant I ate till I was full twice-over. It was deeeelicious. I was happy. After that we visited my grandmother's aunt and then she dropped me off back at my paternal grandparents' place. It was a fun Friday, and a very fun weekend.