Today we went to Topkapi Palace. A very humble palace that probably wasn't put to so much home-use by Ottoman sultans since conquest and enlarging the empire required that they be away from the palace so much. Still, very impressive. We were shown around by a professor friend of our Prof, Leslie Peirce. She has done lots of studies on Topkapi Palace centered specifically around the harem (to the peeps reading this--you need to get out of the Orientalist perspective of the harem as a place of many women solely there for the sultan's procreation purpose. This is wrong. Harem means something protected--for example, there's a term in Turkish that goes "harem cekti" which means that one draws some type of protection around oneself. The walls surrounding Topkapi Palace are a very good example.) Here's a picture of a model of the entire palace... 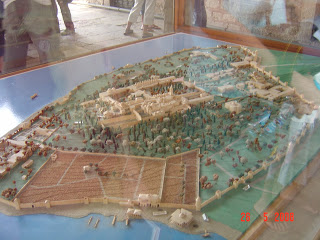 Kind of confusing picture because of the reflection, but you get the idea. Here's a more detailed look at the structure itself... 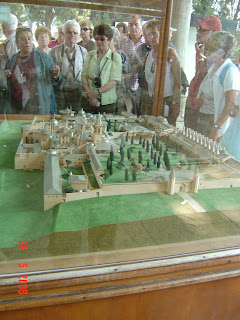 As you can see from the picture, the palace is basically divided into three courtyards with varying degrees of penetrability by outsiders (outsiders being ambassadors and vassals and citizens of the empire. Other armies were obviously repelled before they even got to the gate of the palace.) The first courtyard was where the citizens who had come to ask the sultan for favors would be checked over and their requests reviewed. If approved, they would be able to go into the second courtyard but no farther. The first courtyard was also where all the artisans and the stables were, so you can imagine for yourself the noise of the place along with the many beautiful artworks coming out from it. The second courtyard would be where the janisseries (soldiers loyal only to the sultan taken from different places among the empire; mostly the Balkan region but other places as well) would mass. There are numerous descriptions of how the janisseries could strike fear into the hearts of many, and no doubt they would have been extremely impressive for ambassadors that would come through on their way to meet and greet the sultan. Again, they too could only go so far as the second courtyard and no farther. Still, I'm loving the image of the janisseries massing and then standing stock-still, like not even breathing or blinking and this contingent of ambassadors walk by looking creeped out by these Turks that don't even breathe and who have very impressive looking weapons and whatnot :D Cracks me up every time :D

Before actually going into the second and third courtyards, we walked through the palace kitchens which are the rooms under the cone-shaped chimneys seen on the right in the photo above. That's the second courtyard, by the way. The building across from the palace kitchens is probably the most important part of the palace because that is essentially where the entire empire was ruled from. The tower that can be seen is actually the place where the Counsel of Ministers met. There was also a room in there with a grate where the sultan would sometimes come and look through unannounced so as to see if his counselors were doing their jobs correctly. Here's a picture of said grate... 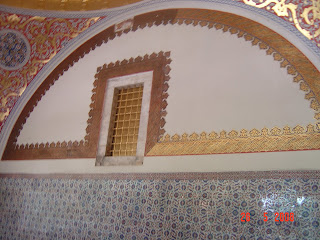 Now that I've mentioned the janisseries and the eunuchs, it would be a good idea to tell of how they are chosen. These two groups were made up of Christian boys who were taken from their families between the ages of 12 and 20. This process is referred to as "devsirme." Despite how horrible it sounds, this was actually a very advantageous process, because in some cases some of these boys would later on rise to very high positions in government, including becoming ministers on the counsel of the sultan. These boys were first off converted to Islam, and they were stripped of any loyalty other than to the sultan. They were also educated very well, and had very close ties to the sultan. And this only applied to Christian boys--some Muslim families are said to have given their sons to Christian families and make them pretend to be Christian in order to get into this system as well. Jews were exempt since they were engaged in trade and finance and thus provided a nice revenue for the empire.

Another thing to mention about the Ottoman empirical system is that there wasn't a very solid up-down hierarchy going on, it was more in or out. If you were in, you were favored and had many advantages. If you were out, you were out.

While walking around the inside of the palace, specifically in the third courtyard, there was a room full of many sacred icons of all religions which we got to visit. It was quite spectacular. The walls especially were very beautiful since they were filled with tiles with beautiful designs. I wish I could show pictures but cameras were banned in that room. This isn't to say the contents of the rooms weren't impressive, they were. We saw David's sword, Moses' cane, Muhammad's beard, keys and locks to the Ka'ba, bones of some saints, and swords of Muhammad, Ali, Osman, Omar, and Abu Bakr.

After taking a tour of that room and looking around some more in the third courtyard, we decided to go walk around the harem itself. The rooms were simply spectacular. Murphy's Law required of course that I run out of both memory and battery, but I had my trusty phone with me so I took some pictures with that.

The harem was very, very impressive. The walls were all lined up with beautiful tiles containing intricate designs; the rooms had domes and these domes also had intricate designs painted within them. The walls of the rooms were also painted with flowers and leaves in the most amazing manner possible. Within the harem, the Queen Mother's rooms dominated, and they were very impressive. For some of the rooms the windows were painted like windows in a church except these all had tulips on them... 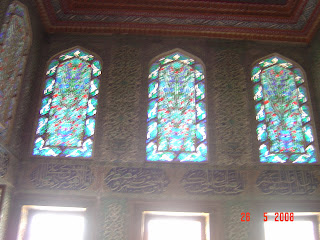 Sorry that it's so blurry. But you get the idea. And this is a pretty good picture also because it shows the verses of the Qur'an or hadiths from the Prophet Muhammad that are written on the walls of the harem.

Something interesting to mention here is the fact that everyone on the imperial payroll was paid, and how much they got paid depended on the job they had. Meaning men and women were paid equally within their respective jobs. The devsirme system also applied to the women although they were more for in-palace work rather than used as janisseries. But still. I was surprised and impressed to learn that equality within the payroll reigned in the palace.

After we finished walking through the palace, the group sort of separated with all of us having the intention of getting food. Kristina, Amanda and I decided upon a restaurant that sold gozleme and other wonderful food as such, and each of us got a different kind of gozleme. I got potato. It was delicious. Kevin, Clayton, David, and Zoe were also with us, but the three guys got their classic, fulfilling-only-for-a-very-short-time, chicken doner for cheap, and Zoe eventually went to a Simit Saray to get her classic simit sandwich. Our gozlemes though, were deeeeelicious. We were pretty set on sitting and doing nothing for an hour or so but seeing as how we're such an energetic group, we couldn't sit still, and so we asked for the check. Here's where the "Lira" part of the title comes in. Amanda paid for us all because she wanted to break her 50 Lira, and when she gets her change, there's also a 1 lira in there. This, she accidentally drops on the ground and begins to frantically search for it, enlisting our help in the process. None of us were in a position to help out all that much since we were all rolling around on the floor laughing ourselves breathless, but the best part of the search for the 1 lira came when Amanda replied to Clayton's "dude it's just a lira" with "No, dude, it's not just a lira. That's a doner." After that, there was no way any of us were going to be able to keep a straight face and we just dropped from laughter. It was a fun afternoon in a restaurant. I'm pretty sure those waiters have seen some interesting things, but nothing probably came close to the weirdness of 6-7 Americans plus a Turk looking around for a lira.

After eating and getting our batteries re-charged, we headed off and did a walk around our part of Europe. It was fun. It was kind of hot but there was some wind so it wasn't as bad as it could have been. While walking around, we got to the Unkapani Bridge (I think) and while we were crossing over the bridge, one of the shoeshine people walking by dropped his brush and Clayton being the nice person he is picked it up and handed it to the guy. Which started off a very funny situation. The shoeshine guy started walking away but then turned around and called to Clayton and started shining his shoes...This was all wonderful and good, and the shoes got shined, and the rest of us and Clayton are just waiting there expecting the shining to be done for free, except right when he gets done, the guy says, "20 Lira." All of us were like yeah, no, and Clayton laughed and handed him a 5 lira and walked off. Here's a picture of Clayton getting ripped off by the shoeshine guy... 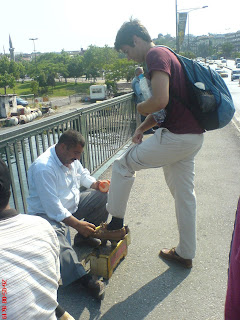 After that, we eventually got home. I hung out at their flat for a while and then went on my own way home. An exhausting but very fulfilling day.