Because Wednesday was Scavenger Hunt Day. And we didn't leave one stone of Istanbul unturned.
Okay, that's a bit of exaggeration, but we came pretty close to it. Wednesday was a very fun day. We met at the bottom of the Galata Tower at a little teahouse, and there we separated into three groups, two of three people one of four people, and The Prof gave us all a sheet of paper that had everything we needed to do listed on it. That day was walking around day. We walked A LOT. And we went a lot of places and saw a lot of interesting things.
My group had it a bit easier so I feel kind of guilty--knowing Turkish helps a lot and I was always too lazy to not say anything which kept us from getting lost, which kind of made Zoe and Kevin not have the full experience of getting lost and not knowing the language and somehow managing to communicate anyways and getting directions to places. I did let them lead towards the end of the scavenger hunt, but for the most part, I kept asking for directions and whatnot. Still, it was fun, and we enjoyed walking around the city a lot.
Some of the things we had to do was to figure out how many Starbucks were on Istiklal, what patlican, enginar, cilek, elma, balik, balikci, simit, and simitci were (eggplant, artichoke, strawberry, apple, fish, fisherman, Turkish bagle essentially, Turkish bagleman), get a train schedule from Haydarpasa Train station (meaning cross over to Asia), eat ice cream on Asia, find the Sublime Porte (not so Sublime), take a picture of ourselves in front of three Mimar Sinan buildings (the greatest architect of all time, built many many mosques without using modern technology but his buildings still stand whereas the random modern buildings that get put up collapse at the first sign of an earthquake), take a picture of ourselves in front of Kasier Wilhelm's fountain, and much much more. We also had to go and visit at least two palaces in which Ottoman sultans had lived, but we only had enough energy to do one, which was the Topkapi Palace, and we got a picture of Dolmabahce Palace from the ferry.
It was a very hot day, so here's what I looked like when I decided that it would be better to look ridiculous than get heatstroke or whatever... 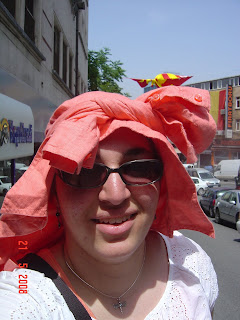 During our walk, we discovered Kalenderhane Camii, which actually used to be a church.
We were really proud to have found this place because it became apparent that it wasn't all that well-known. Its a really nice place, very similar to Aya Sofya, because its' walls are also covered in marble (with the exception of the ceiling), and it has a feeling of originally being a dark place, but now there are windows opened up all around it that let in the light. One minaret, of course, and only one dome, I think. A nice place. It was very peaceful. It's still actively used although there wasn't all that much action going on around it. It has the best acoustics I've ever heard though, that has to be mentioned. Right when we were walking out, a man went in and started to read the Qur'an, and I was spell-bound. It had to be one of the most beautiful things I'd ever heard. Here's a black-and-white photo of the interior that Zoe took that has Kevin and I in it. I think its a pretty good shot so... 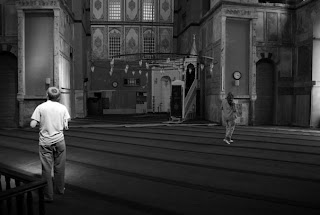 After doing all our walking, we went back to Istiklal Caddesi and our final mission was to find the Prof and William's apartment, and we had it easy with that one too. Kevin had gone there before when he came from America, so he knew the way.

By the way, I don't really want you to think that it wasn't hard and arduous for us--it was. We did a lot of walking and talking and energy spending. Its just that me knowing Turkish helped out a lot.

And guess what I did at the end of that day? Ate, took a shower, and shwoomed on to my wonderful beautiful waiting-for-me bed.
Posted by Yekta at 5:05 AM