Today was when we had a meeting with Murat Ozyuksel, a man who's done research into trains and has also done a nine-part documentary on trains in Turkiye. He is also a member of a rock band which we all thought was really cool. He brought the first part of the documentary and we watched it at the boys' flat. It was in Turkish so guess what happened? That's right. I translated the whole thing. A half hour documentary almost became an hour because I had to pause it so many times. It was okay, the music was very good, but the content didn't seem to me to be very related to what we were discussing in class and the fact that the movie was in Turkish and the fact that I had to pause the movie every couple seconds made it boring. But, we did it and got it over with. Then we went on the terrace and talked some more about what we had just seen.

The railroad is a very important invention for all of the world since it increased the speed of essentially everything. It changed the way people dressed and acted. Workers and raw materials could be transported faster; ideas got around quicker and most likely had a bigger effect; helped out the economy of some nations (mostly colonizing nations) while managing to ruin the economy of others. Basically the railroad created as many problems as it solved. Still, it was a very big and important invention that did help out most of the time.

After discussing trains and railroads and their implications, the Prof said that we could now ask him any questions we wanted to, and two important questions were asked: what do you think of the closing of the AK Party (ruling party of Turkiye right now) and what songs/musicians/artists would you recommend? His response to the political question was one that I thought was a good answer--he said that although he wasn't a big fan of AKP, the party had still been elected by the people and thus for the sake of democracy their status should be respected and this appeal to close the AKP is completely ridiculous. As for the musicians, he offered some groups, and one of them happen to be my favorite Turkish rock group, Mor ve Otesi.

We were going to have dinner at the Shields' house, so I stayed over at the girls' flat that night.

Wednesday was the day Clayton and I had agreed upon to go to Kariye Camii, which we had picked for our site presentation. What a day to pick though, because it was closed. But, we made the best of it and decided to walk around some and visit the many other mosques around the area. So the mosques we visited in about a span of 3 to 4 hours were: Kariye (which is now a museum and was thus closed), Fethiye (same deal as Kariye--pissed), Ismail Aga Camii, Yavuz Selim Camii and his tomb along with the tombs of the princes close by, Fatih Camii and the tomb of Fatih (Mehmed the Conqueror), Sehzadebasi Camii (my favorite mosque ever now), and Suleymaniye Camii along with the tombs of Suleyman the Magnificent and Hurrem Sultan also known as Roxalana. So that's...7 mosques and 4 tombs. Mehmed the Conqueror's tomb was the most beautiful one I've ever seen, it was quite impressive. And the reason why Sehzadebasi Camii is now my favorite is because it was as if the minute we walked into the courtyard, the world faded away and it was just me and the gardens and flowers. There was peace. It could be that its not a very commonly used mosque, but either way, I got such a nice feeling of peace inside when I walked in that I was simply mesmerized. We couldn't really get into Suleymaniye either because they're doing renovations on the mosque, but from the pictures presented in the little area where we could go in, it's bound to be very very impressive. Hopefully they'll be done soon and we'll be able to go in and take a look around.

After walking around, we went over to Sultanahmet to our meeting point. The morning we'd had off, but in the afternoon we were going to go to the Islamic and Turkish Art museum. So we went there. We were helped on our tour with Nazende, a very nice young lady. There were many beautiful miniatures and examples of calligraphy and rugs and everything, but what I liked the most was the Code of Laws written by Suleyman the Magnificent. Here's his signature, referred to as the "tura" in Turkish... 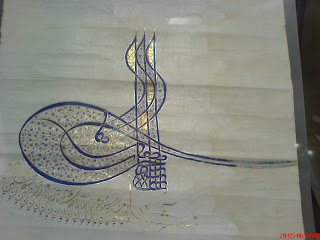 Once we got through with the museum, it was time for Turkish lessons at the Caferaga Medrese. This was actually the first day of Turkish lessons, and the first time we met our teacher, Hande. A very nice lady as well.

Today we went to Sabanci University to meet Aylin Atikler Yurdacan, a teacher of English at said University. While meeting with her, we also met with her students, and after having an interesting discussion of customs in Turkiye and a bit of cultural exchange where we showed them pictures of our campus and North Carolina and tried really hard to come up with food that was specifically North Carolinian and also had Edward do a demonstration of Soulja Boy. That was the best part. After the class, we went to their cafeteria, which I fell in love with. The bathrooms in the cafeteria were clean too, on our scale of 5, it got a 5 in my opinion. After lunch, the kids took us on a tour around the campus, and I found it to be quite nice. When we went to their gym, they took us to the basketball court, and so here's a photo of us from there. I took the picture since they're used to me being a Turk but these guys were new Turks so we decided to give them a chance of being photographed... 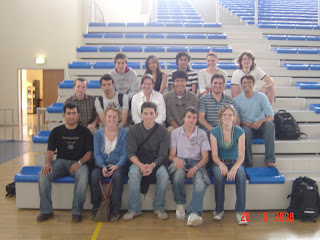 We had a lot of fun with these guys, and their English was really good. The presentations they had prepared for us were amusing as well, and they were very hospitable during lunch, and overall they made us feel very welcome. I liked the campus and everything too, possibly because of the warmth of the students.

Friday morning we met up at the Caferaga Medrese and discussed some more readings. Specifically we tried to answer the question of why the Ottoman Empire ceases to exist. Some of the answers we came up with were:

-unable to enforce ideas because ideas weren't united
-wanting to keep both sultanate and caliphate but modernize them--not exactly possible, you can't have both, its always one or the other
-obvious answer: World War I and the division of the empire by and among the other powers
-another: no set idea of "Ottoman" which is why Ataturk was more successful in unifying the country--he dropped anything not considered "Turk"

After that discussion, we also wondered why the Ottomans had been on the wrong side of WWI, and the answer for that question seems to be the fact that the Ottomans were insecure about their own power, wanted to get involved in the war so as to have some backing, but also wanting to stay neutral. A combination of all these led to a German-Ottoman alliance with the Ottomans hanging on by a thread at the end of the war.

We also touched somewhat upon the Armenian issue. Prof. Shields said that the fact that the Armenians argue about an Armenian genocide and that this happened because they were Armenian is simply ludicrous because the Armenians did a lot of trade, and Turks, if nothing, knew to safe-guard a group that would allow them to have better economy. The Armenian loss of life could be more comparable to the Cherokees and the Trail of Tears instead of the Holocaust. It was also mentioned that its a really bad idea of the Turkish government to not allow access to archives. If they did, all these questions would be answered and there wouldn't be any room for insecurity or speculations.

Last of all, we talked about Ataturk. Father of the Turks. No matter what you think about him, he is a man to be respected. One of the questions considered during this discussion was the question of "How do you make a Turkish state/Turkishness/Turkish identity?" The answer we came up with was to replace Islam with patriotism. It was also decided that war definitely helps to bring people together and support each other, and the many wars going on around Ataturk's time helped him with his take-over and formation of the Republic of Turkiye. Prof Shields also mentioned some of the reforms that Ataturk had done such as changing the dress, getting rid of the caliphate and the sultanate, and, most drastic of all, changing the alphabet. Since Ataturk believed that anything Ottoman was backwards and thus not worthy of his new nation, he got rid of the old Arabic alphabet and effectively cut off current generations of Turks from their rich history. A horrible loss which I don't believe can be justified by anything. The answer of a call for democracy wouldn't work, because Ataturk's governing and government was anything but a democracy.

Friday was my cousin Arin's birthday, so my uncle and my grandparents and I went over to his and my aunt's house to celebrate. It was fun. My uncle bought a cake along the way, and my aunt had made tiramisu. Here's a picture of said sumptuous and beautiful dessert... 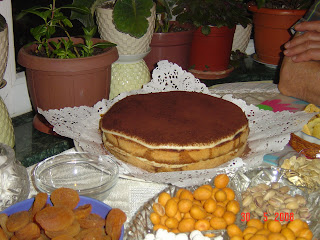 We had fun. My uncle had also organized for Arin's friends to come and surprise him, so I got to meet those guys and girls as well. Nice people. Good friends.

This was when I sent 7 Americans who know no Turkish to Bursa. A conversation between Amanda and Clayton probably puts the entire situation in a way I wouldn't have the ability to describe through words:

Amanda- "Yekta looks worried. I think she knows something we don't."

As you can see...yeah. I was worried. However, if you check out their blogs, they all had an awesome time. Rhombus rooms, Bursa's hamams, Turkish hospitality, broken squatty potties, etc, they pretty much had a crash course in Bursa and Turkishness.

This was also the weekend when Emily went to Izmir to meet up with some family friends of hers. After relating the story of what happened with her, Amanda summed everything up by saying, "Emily was pampered, while we wished we had Pampers."

On Saturday I didn't do anything. It was a relaxed day. On Sunday however, I got up and in the afternoon I did a tour up the Bosphorus with some family friends. This was fun too because I hadn't seen these friends in a while and they have a daughter who is really, really cute. Here's a picture... 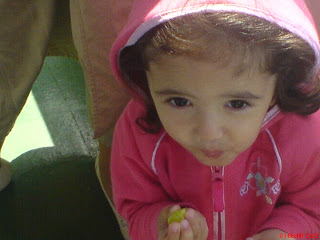 Like I said. Very cute. The tour up the Bosphorus was really fun; on the ferry they had someone doing commentary on the monuments and palaces and homes that we passed by, and after a certain point the guy talking would have live music come on and play songs about Istanbul. It was quite a nice experience. After the tour, I went up to the house of the family of the friend and was overwhelmed with Turkish hospitality. It got really funny when the woman of the house handed me a plate of dessert right as I was getting ready to go home. I sat down and ate all the dessert on the plate and then was allowed to leave the house. So much fun. :D