Saturday was definitely one of the busiest days of my life. I walked everywhere. I don't know why I didn't use the tram that was right with me everywhere I went. Public transportation is really very nice in Turkiye, there's the tram, the taxis, the train if you really want to get on there and do that, the buses (which take akbil, which is definitely my favorite and best friend right now), and the ferries. The ferries are definitely my favorite mode of transportation because I get to see almost the entirety of Istanbul in all its splendor. And depending on the time of day that I ride the ferry, I get to see Istanbul at its haziest (in the mornings usually), at its brightest (around midday--this mostly happens if we as a group are going to Asia), and of course, at its most classic view (at night--this is when everything is lit and you see the shadows of the buildings themselves but they're framed by the lights placed artistically around the buildings).
Back to Saturday itself. I woke up really early on Saturday, and I went to Fenerbahce Camii where I saw some very old friends and prayed the morning prayer. Indeed. The forreal morning prayer :D Exactly. The one where you get up at four in the morning and make it to the mosque by five. It was wonderful. No one in the mosque except for the few others who wanted and knew to come. A peaceful mosque; one that hasn't gone through the hassle of having millions of tourists walking through along with the Muslims who actually come to pray. No smell, no sound. Just silence. And then the prayer starts. Moving in sync with the people next to you. Nothing gives a sense of community like the way Muslims pray. No matter that some of them might be doing different motions at different points of the prayer--the basic ones are all the same, and everyone does them at the same time.
So I woke up and went to the mosque and prayed with a group of people including my uncle, who gave me a ride so many thanks are due to him. After the prayer we all went to the house of one of the people who participated in the prayer and had breakfast. After breakfast, I asked my uncle to drop me off at the Uskudar Iskele and from there I went to Karakoy. I walked across the Galata Bridge. Here's a picture of Suleymaniye Mosque as seen from the bridge... 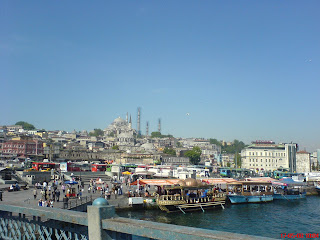 They're doing construction on it right now, but I like how the blue things around the minarets kind of blend into the blue of the sky.
I did a lot of walking around Eminonu on Saturday. I went through the Misir Carsisi to Kapali Carsi, and from there I walked to Suleymaniye Camii itself. I don't have too many pictures of that day, but it was a fun day. After walking around I finally made my way back to SultanAhmet Camii and there I sat down for a while and rested a little. That was when I remembered that Omid Safi, another professor at UNC, had also brought students over here, so I decided to call them. Having called their hotel I learned that they had left for SultanAhmet! So, since I was already there, I went on ahead into the mosque complex itself and lo and behold, there they were! I'm really happy I was able to find them, because Omid took his students to a little mosque called Little Aya Sofia which is exactly as it sounds. Its a little mosque now, but it used to be a church. The mihrab part of the mosque isn't like any of the other mosques--usually there is some type of architectural design that goes with the place, but in this case it was flat with little ornamentation. Also, around the walls of the place, the old writings in Greek or Roman still remained. 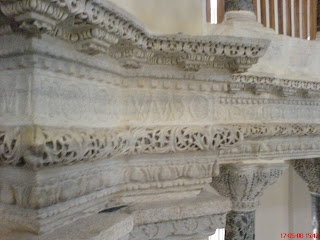 The mosque was also interesting because around it was an arts and crafts place where arts such as ebru, calligraphy, and many others were being displayed by the makers. There were some very beautiful things in there which I wish I had enough money to buy. There were also really cute cats around. And there were some kids playing who were really cute.
Oh, before going to the Little Aya Sofia, we saw Kaiser Wilhelm's fountain. It looked very nice and pretty and shiny, so here's a photo. 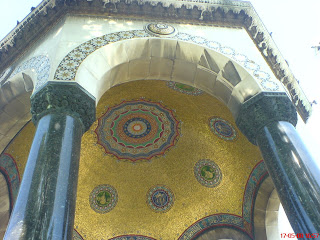 I don't have a holistic picture of the fountain, but its very pretty.

After walking around for that long I went home and shwoomped onto my bed. And that was basically the end of that day. A long day, but a fun one. :D