After coming to Turkiye, I got picked up by my uncle and after that followed a storm of phone calls to everyone that I could remember to call that I had arrived safely. My SIM card worked, but I didn't have any minutes on it, so I couldn't call anyone. My mom could call me though, and things worked out after that since she got my uncle to call me and I got to tell him that I was just waiting for my luggage to come. So I came, and I got minutes on my phone, and then I was off. I didn't do too much my first half day here, so let's start with my second day here.

So. May 15. That day my uncle took me out and around Istanbul and showed me the way to the ferries and whatnot from my grandmother's house. I'm on the Asian side of Istanbul, and I have to go to the European side for my class. But, I'm liking it, because it's serious exercise, and besides which, I get a full view of Istanbul with the calm sea every time I get on the ferry.

After getting to the other side of Istanbul (the European side) my uncle took me to Istiklal Caddesi so I could walk around and see Galata Kulesi and the places around it. While walking on Istiklal Caddesi we went to the Galata Mevlevihanesi, and there I met Mercan Dede. Cool guy. Here's a photo of him talking with my uncle... 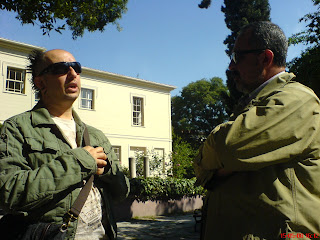 They talked for a while, and then we went our own ways. My uncle had a concert that night, so we went to that concert. It was fun. They sang some really nice songs that I probably would've enjoyed more if I hadn't been so sleepy and about to fall asleep. There was however, one song that I really liked that was played (instrumental) by a viola and a kanun. They played one of Cinucen Tanrikorur's compositions, and it was really wonderful. It also showed me just how powerful an instrument the ud is because even with the combination of the viola and the kanun they couldn't really give me the feeling that the ud does whenever I hear it.

That was pretty much my Thursday. Friday I didn't do too much...I went to the other side of Istanbul again and met with Professor Shields to see the apartments and everything. After that, I met up with my uncle and then we went home.